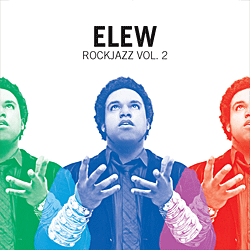 Talented musicians are working hard to make jazz popular again. Robert Glasper and Esperanza Spalding put out pop-oriented albums last year, and now comes ELEW, as Eric Lewis has rechristened himself, with Rockjazz Vol. 2. ELEW chucked his given name and conventional jazz career aside a couple of years ago to make a run at stardom by unleashing his solo-piano skills on well-known rock tunes. His is a more physical and visual art now, as he performs standing up and wearing medieval braces on his forearms. He’s made a series of flashy music videos, wowed the crowds at a TED conference and on America’s Got Talent, toured as opening act for pop star Josh Groban, and collected notable fans such as designer Donna Karan, actor Forest Whitaker and First Lady Michelle Obama.

Jazz heads, however, are unlikely to be impressed by how all this translates to the album at hand. “People Are Strange” is interesting as a sort of novelty tune conjuring a meeting of the Doors and Scott Joplin. The Michael Jackson hit “Human Nature” is substantial enough to warrant a jazz star’s attention, as Vijay Iyer and Miles Davis have already demonstrated. Joe Henderson’s “Inner Urge” gets mixed in with the pop stuff, and like ELEW’s pair of originals (“Complexions” and “Thanksgiving”) comes off well in comparison.

But most of what’s here is very slight stuff. U2’s “I Still Haven’t Found What I’m Looking For” is rendered sprite-like and pretty but bland, and the Rolling Stones’ “(I Can’t Get No) Satisfaction” has little more point to it than a Muzak version would. And the repetitive bombast of the opening track, “Believe,” is enough to repulse jazz buffs from the get-go.